An introductory guide to doing research in Spanish and Portuguese language, literature, and cultural studies.

Primary sources are original works contemporary with the issue, development/movement, or period being studied (i.e. romantic poetry).   Please note that primary sources can come in many formats – they can be published or unpublished, a printed text or a text that has been digitized, an artifact, a recording, a painting or an image. In literary studies they are most often texts but sometimes other forms of media, such as film are used.  Primary sources can also be reprinted or issued for publication or made accessible to the public long after their creation. Because of this, primary sources can be found in all sections of the library. They are published in books that are in the circulating stacks. They are manuscripts found in Special Collections, microfilm, in databases, or online.

A first step to searching for materials on your topic is to talk to experts who can suggest beginning sources to you: your professors and anyone else that they recommend.

There are three useful principals to remember and apply when searching any kind of electronic search tool (a library catalog, a digital library, a database, the internet, etc.)

1. A keyword search in any resource will point you to great initial resources, but you will not find all of the resources you need this way.

2. It is really important that you follow up on your initial searching by:

b) carrying out seed research: go to the initial sources and check the footnotes, endnotes, and bibliographies to find further resources.  It is also helpful to walk around the shelves in the library where you find initial print sources, as other related sources will be shelved in this area.

3. Use reference sources to start your research as well.  There are great electronic and print reference tools (dictionaries, encyclopedias, atlases, and more) that can help you clarify and narrow down your topic and identify great starting resources.

A helpful place to identify and learn more about different tools to use in keyword searching (including boolean operators, truncation, and subject headings) can be found on the Search Strategies tab of the MCWP 50 & MCWP 125 Research Guide.  See also the table below.

In identifying what qualifies as a "scholarly source," the following UCSD Library Guides may also be helpful:

Using Citation Software to capture the resources you find through your searches is also very helpful.  Check out the "How to Cite" Research Guide is an indispensable guide to using citation management systems as well as conforming to particular citation styles.

Try one or two of the following strategies in the database you want to use.  Not all of them are available in every database. Different strategies will change your results and help you target the articles you need. 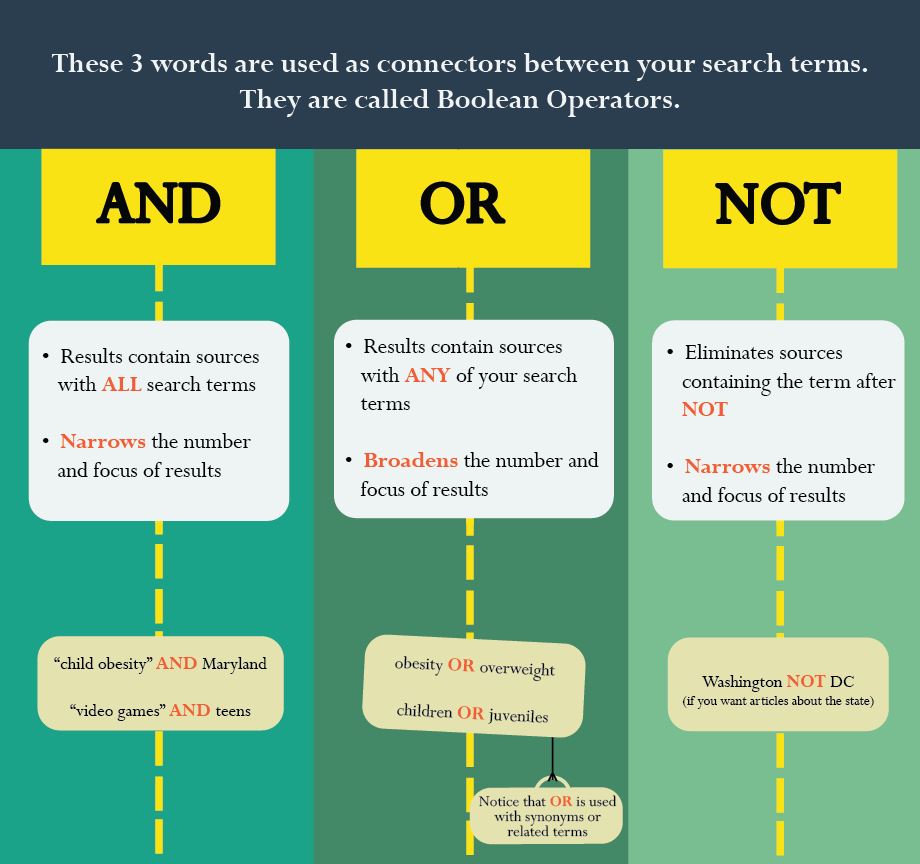 Limits provide database-specific recommendations for narrowing a search. Applying limits will filter out results that don’t meet your search requirements. This will save you time because you won’t need to look through pages of search results that don’t include the information that you need Each database offers different limits. Be sure to check them out to see how they can help you with your search.

For example: In the database, Historical Abstracts, you can filter your search results for peer review, publication date, document type, language, subject, etc.

The image below illustrates how applying limits will help you to narrow
your search results. 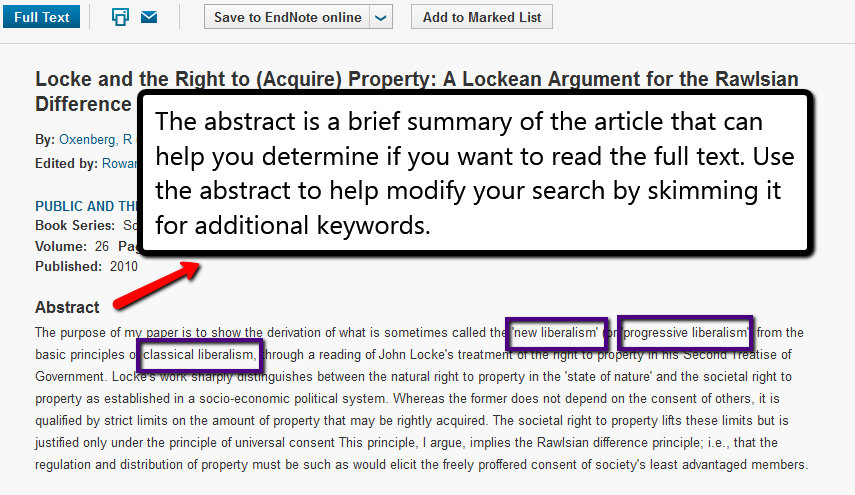 Scholarly articles often have extensive bibliographies, also called reference lists or works cited pages. Bibliographies include references to articles, books, and other relevant literature that were published before the article. Some databases provide links to the cited references so that you can look at those articles as well, which might provide more articles for you to use in your paper.

Cited References can help you find articles that are older than the one you are reading. 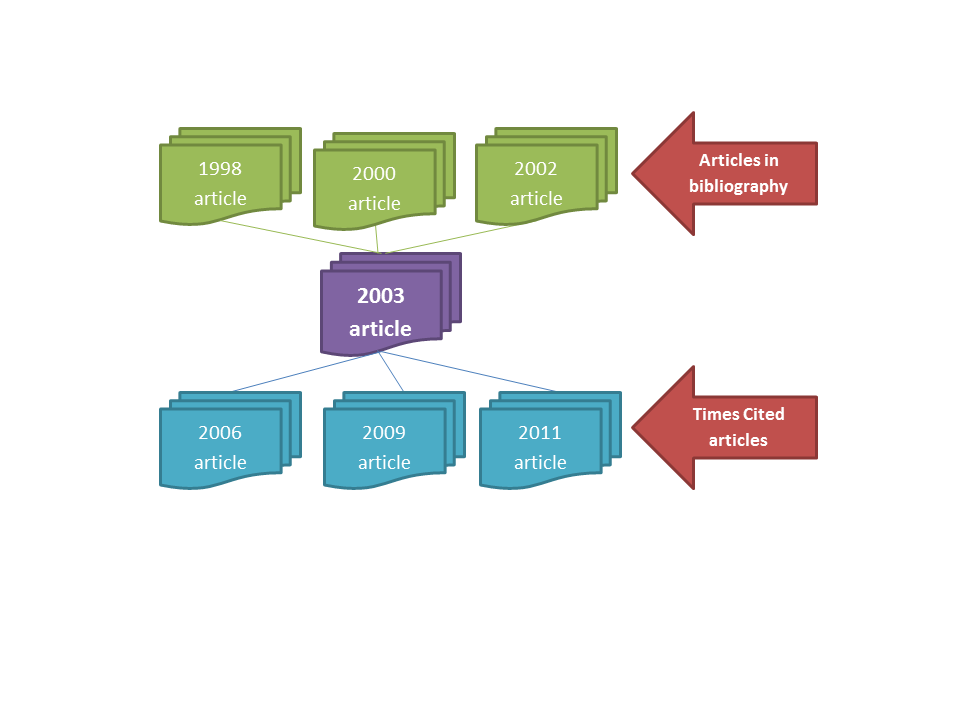 Look at the example to the left. If you found a relevant article from 2003, you could look at the articles in the bibliography to see where your article got the information used to support their main points. These older articles can also be useful to your research, especially if you need to write a literature review.

You can use a similar method to find newer articles, by looking at the articles who have cited your 2003 article in their bibliographies. To find out more about this method, see the tab for Times Cited references.

Times Cited references can help you find articles that are more recent than the one you are reading.

Look at the example to the left. Let’s say your professor doesn’t let you include references in your paper that are older than 2005. You are finding articles about your topic, but they are all too old. Even the best article about your topic was published in 2003.

Using times cited references, you could see which articles have cited the 2003 article. Chances are you will find one published a more recently that you could use for your paper.

When you find an article that you think will be a good to use, you can take advantage of “related articles” to find similar articles. Databases have different formulas for determining how an article is “related,” but it usually is a combination of same keywords and descriptors.

You can usually find a list of related articles on the results screen of the database. 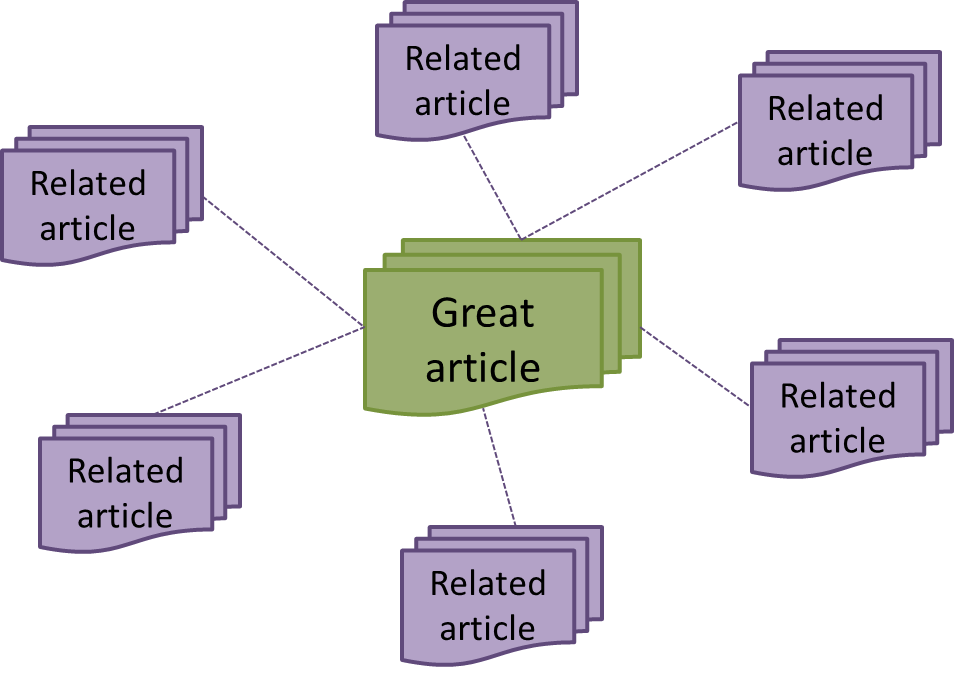