For legal protection reasons, it is recommended that for every item you use under the fair use clause of the Copyright Act that you complete a checklist and keep it on file for three years following the last date of use of the item.

The Fair Use Checklist will help you determine if your intended use falls within the limits of fair use under U.S. copyright law (Section 107 of the U.S. Copyright Act). The four factors form the structure of this checklist. You need to consider the relative persuasive strength of the circumstances and if the overall conditions lean most convincingly for or against fair use.

Code of Best Practices for Fair Use in ...

This work is licensed under a
Creative Commons Attribution-Noncommercial-Share Alike 3.0 License 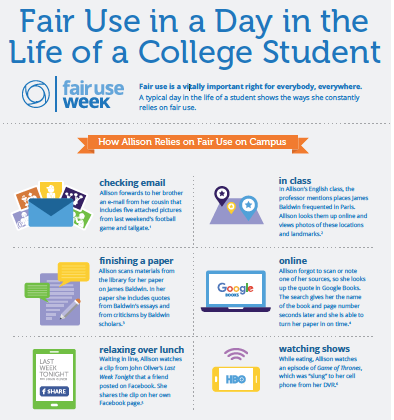 See the entire Fair Use infographic and credit here

From the Center for Media & Social Impact

IF I’M NOT MAKING ANY MONEY OFF IT, IT’S FAIR USE.

Noncommercial use is indeed one of the considerations for fair use, but it is hard to define. If people want to share their work only with a defined closed-circle group, they are in a favorable legal position. But beyond that, in the digital online environment, wholesale copying can be unfair even if no money changes hands. So if work is going public, it is good to be able to rely on the rationale of transformativeness, which applies fully even in "commercial" settings.

IF I’M MAKING ANY MONEY OFF IT (OR TRYING TO), IT’S NOT FAIR USE.

Although nonprofit, personal, or academic uses often have good claims to be considered "fair," they are not the only ones. A new work can be commercial--even highly commercial--in intent and effect and still invoke fair use. Most of the cases in which courts have found unlicensed uses of copyrighted works to be fair have involved projects designed to make money, including some that actually have.

FAIR USE CAN’T BE ENTERTAINING.

A use is no less likely to qualify as a fair one because the film in which it occurs is effective in attracting and holding an audience. If a use otherwise satisfies the principles and limitations described in this code, the fact that it is entertaining or emotionally engaging should be irrelevant.

IF I TRY TO LICENSE MATERIAL, I’VE GIVEN UP MY CHANCE TO USE FAIR USE.

Everyone likes to avoid conflict and reduce uncertainty, and a maker may choose to seek permissions even in situations where they may not be required. Later, a maker still may decide to employ fair use. The fact that a license was requested--or even denied--doesn't undercut an otherwise valid fair use claim. If a rights holder denies a license unreasonably, this actually may strengthen the case for fair use.

I REALLY NEED A LAWYER TO MAKE THE CALL ON FAIR USE.

Fair use is a part of the law that belongs to everyone. A lawyer usually works for a client by reducing risk; in copyright law, that often means counseling purchase of rights for all uses of copyrighted material. If clients tell lawyers that they want to assert their rights (something that has a very low risk, if they understand what their rights are) then lawyers can recommend appropriate policies; but lawyers need to be told what their clients want.

And finally, a special note from the lawyers among us: Be careful not to draw too much from specific past court cases.

A good example of one decision that easily can be over-interpreted is the California District Court decision in L.A. Times v. Free Republic, 56 U.S.P.Q.2D (BNA) 1862 (C.D. Cal. 2000), which ruled that a right-wing electronic bulletin board that invited reader comments on mainstream media content was not fair use. This anomalous case predates a Supreme Court decision (Eldred v. Ashcroft, 537 U.S. 186, 2003) that clearly asserted the link between fair use and free speech. Furthermore, decisions like Bridgeport Music, Inc. v. Dimension Films, 410 F.3d 792 (6th Cir. 2005), dealing with infringement standards in music sampling, are widely cited for fair use principles when in fact they do not concern fair use at all. While case law is of essential importance in establishing legal norms, it is the trend in case law that determines such norms. The trend in case law about fair use has strongly been in the direction of supporting transformativeness as a core measure of fair use. This puts the judgment about fair use back squarely in the hands of the new creators and platform providers, who must look carefully at how videos repurpose copyrighted works.

1. The PURPOSE and character of the use, including whether such use is of a commercial nature or is for nonprofit educational purposes;

2. The NATURE of the copyrighted work;

3. The AMOUNT and substantiality of the portion used in relation to the copyrighted work as a whole; and

4. The EFFECT of the use upon the potential market for or value of the copyrighted work.

Fair Use Cases and Testimony

Specifics in the Fair Use Statutes