Held every 10 years since 1790, the Census is the most comprehensive demographic survey in the United States. Although the questions asked change from year to year, through 2000 there were always variables related to age, race and ethnicity, languages spoken, education, ancestry, income, home ownership versus renting, and more. In theory, the Census counts every person living in the United States. Although in reality there may be portions of the population that go uncounted, it is still the closest we have to complete demographic and economic data on the U.S. population.

As of 2010, there is no longer a Census long form. A short form, containing only questions such as age, race and ethnicity, will be sent to every household in the country. A longer questionnaire called the American Community Survey (ACS) covers questions previously appearing on the decennial long form.

Since 2005, the ACS - which includes approximately 50 questions - has been sent to 1 in 40 households in the U.S. Over a period of five years, this approximates the number of households that would have normally filled out a long form decennial Census. Starting in 2010, aggregates of five years of data will be released each year. This means that fresh demographic data about the country will be available every year instead of every 10 years. Although the ACS data is only sample data, it's a great improvement in the availability of recent demographic data.

An important point to keep in mind is that, due to differences between how data was gathered for the decennial census long form and for the ACS, you need to be very careful when making data comparisons between census years. A couple of good resources for getting a better understanding of this are available from the Oklahoma Department of Libraries and the Census Bureau.

Important Note: Tract-level data is not available for ACS 1-year or 3-year estimates.

What's in the Census?

Questions change from Census to Census, sometimes dramatically, which means that the statistics available change from decade to decade. For most of the twentieth century the Decennial Census has included a “short form” with questions answered by every household in the country, as well as a “long form” that is answered by about 1 in 6 households. Questions on the short form (age, race, etc.) are the basis for the Census 100% data (available in summary file 1 & 2). Questions on the long form (education, income, etc.) are the basis for the Census sample data (available in summary file 3 & 4).

The easiest way to find out what information is available for a specific Census is to look at the Census questionnaires. If the question wasn’t asked, the information isn’t available. For copies of the original Census questionnaires since 1790, see the Census publication Measuring the Census: The Decennial Censuses from 1790 to 2000; the Census Bureau's Index of Questions site provides questions asked for decennial censuses from 1790-2020. The Bureau also provides an archive of ACS questions asked.

There's also this very handy chart that shows which variables appear on the decennial Censuses from 1790-2000.

When comparing Census data from different years, remember that demographic definitions and other information are reported differently for each census. A variable reported in 1950 may not be available in 2000 and vice-versa. See the UCSD Library's Census Research Guide for an overview of each Decennial Census & available data.

There are two major databases that provide access to census data. The first is the Census Bureau's data.census.gov, which includes various data back to 2000. The other is Social Explorer, a commercial product to which the UCSD Library subscribes. Social Explorer provides data from the decennial census and the American Community Survey, covering years 1790- . Most people find Social Explorer much easier to use.

In addition, the San Diego Association of Governments (SANDAG) provides several census data products for the county of San Diego. Explore their Data Surfer for recent data, or see their main census page for links to available data sets.

Census Reference Sources
These books contain general information on the Census and can help troubleshoot issues like data that doesn’t seem to match up, identify the questions asked in a given year, and explain Census geography.

While the Census does use geographies we are all familiar with such as states, counties, places (cities), it also uses geography very specific to the Census. Locally designated boundaries such as community planning areas, neighborhoods, police beats, library districts, etc. are largely ignored in favor of specialized Census geography that allows for a standardized way of looking at geographies smaller than a city. The key small areas are defined below.

Census Block: This is the smallest unit of Census geography. A block generally corresponds to what we would think of as a city block, bounded on four sides by streets. Depending on the area, other boundaries are used to define as block, such as railroad tracks, water, and even power lines in some rural areas. Blocks tend to be the most stable of the small Census geographies as population numbers are not generally used to define them. Only 100 percent data is tabulated at this level, as the population numbers are too small to tabulate sample data from the long form and still ensure respondent anonymity.

Census Block Group: A collection of blocks, a block Group is the smallest geography for which sample data is tabulated. An Ideal Block group has a population of 1,500 people, with populations ranging from 300 to 3000 people.

Census Tract: Although a Census Tract is designed to be a relatively stable statistical subdivision of a county, they may change between Censuses because they are roughly based on population numbers. The ideal population of a Census tract is 4,000 people, but they may vary between 1,000 and 8,000 people. Although the tracts may change between Censuses, an effort is made to keep the areas comparable. For instance, a tract that had large population growth in the 1990 Census, may have been split into two tracts for the 2000 Census, but those two tracts together retain the same boundaries as the original 1990 Tract allowing a direct statistical comparison of the areas.

In addition to the specific resources listed on the document below, you can also try a general keyword search in UC Library Search to see what else you're able to find that may be of use.

The most difficult part of defining your Census geography may be figuring out how Census areas overlay with the streets and neighborhoods we know from everyday life.

You will need to determine what Census tracts best match up with your community to find the Census data you need. Tract boundaries may not match up exactly with the official boundaries of your community (which you can usually find on the community plans page), so you'll also need to determine if you will include portions (blocks, block groups) of tracts that are not fully included in your neighborhood. If so, you'll need to use a combination of street maps, Census tract maps and block maps to define the specific area of research.

Note that different maps, such as those that accompany the city community plans or the ones from the San Diego Police Department or City Council, may show different boundaries; you will need to decide which one you would like to use. Also consider how your client is defining the area.

Be aware also that Census tract numbers and boundaries may change over time; the farther back in time you go, the larger tracts are likely to be. Check boundaries for each of your Census years before making a final decision on how you're defining the community.

Once you have identified the geographic boundaries of the area, you will need to find the census tracts encompassed by the area. To do this, you can use: 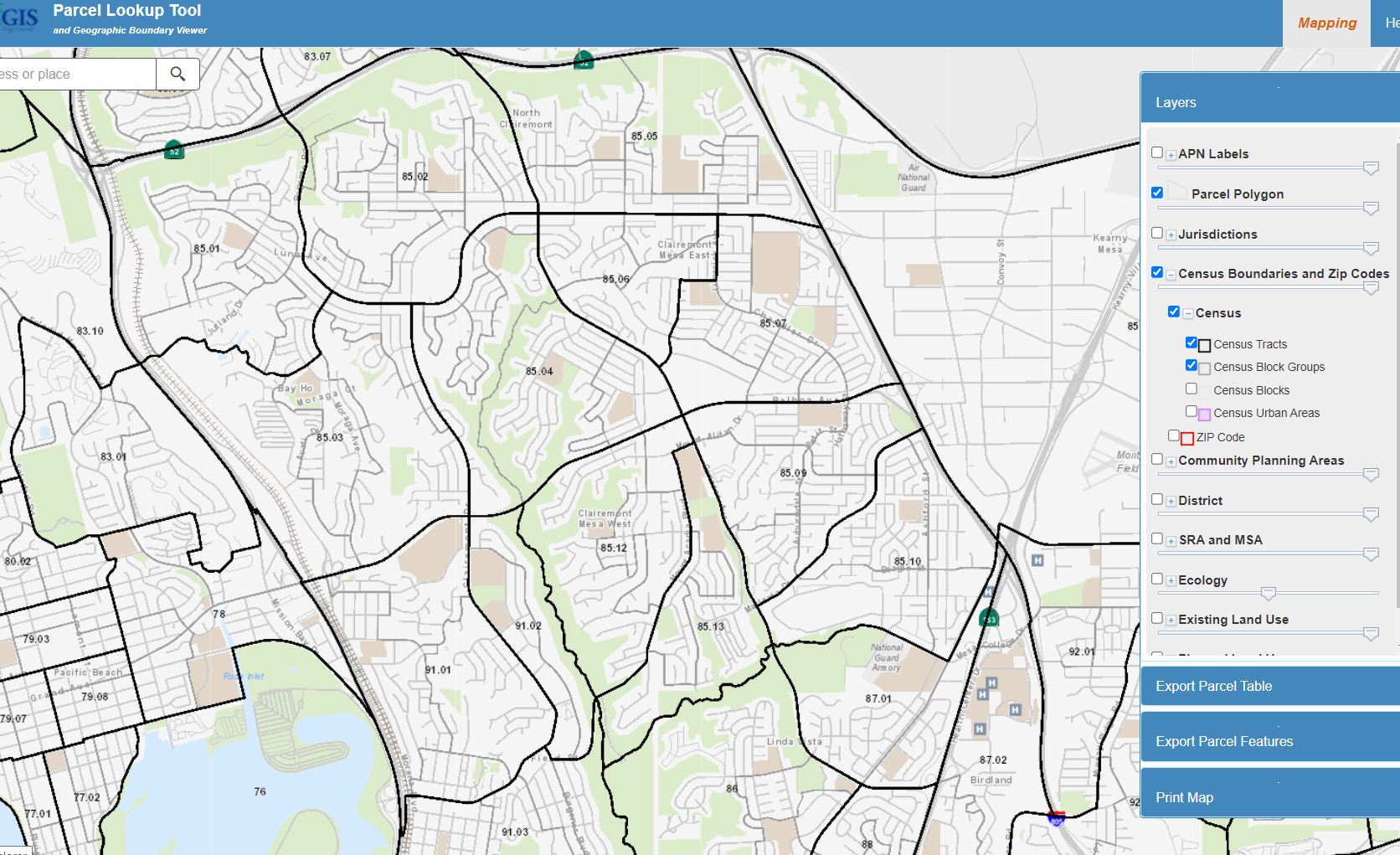 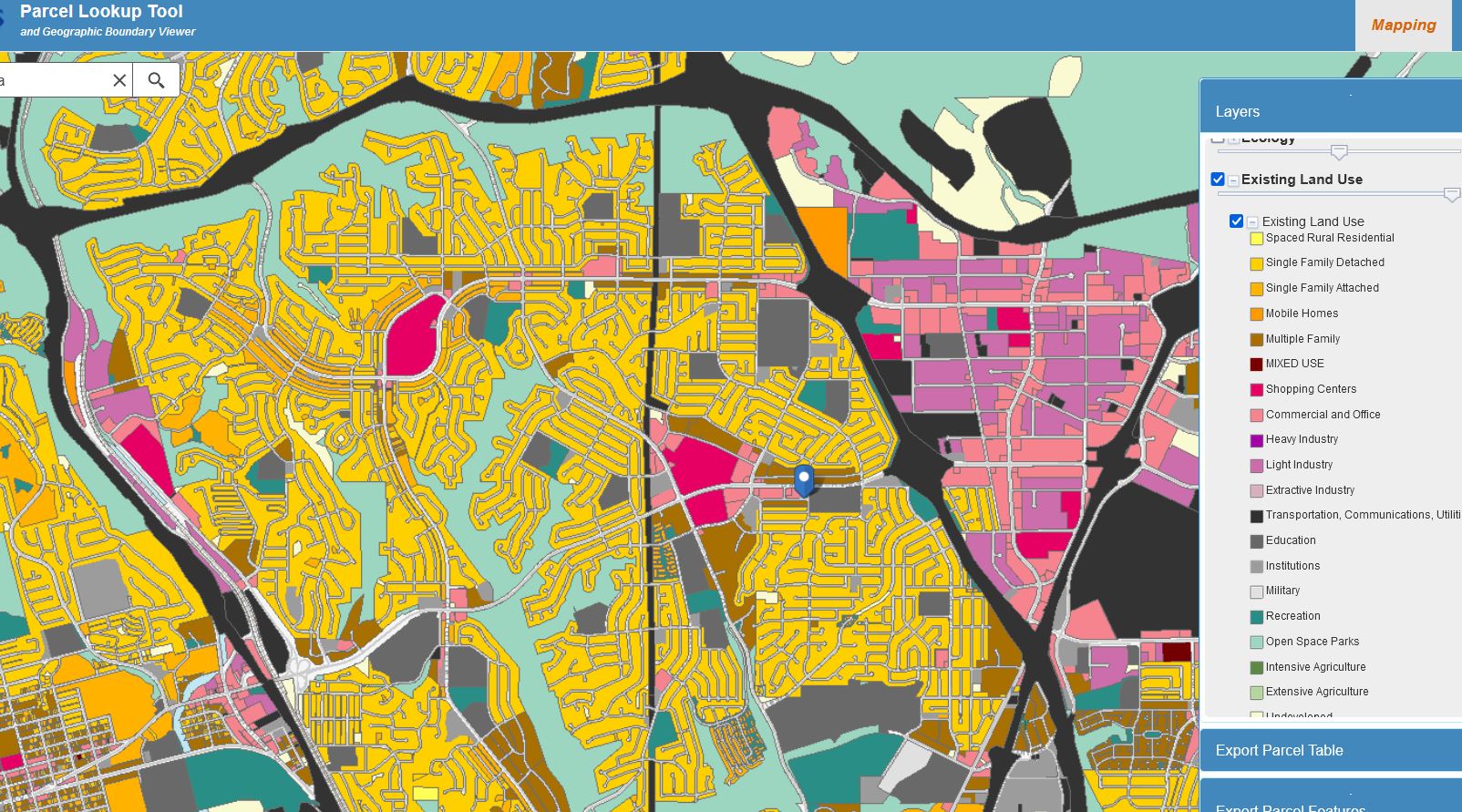